It’s impossible to think about Germany, or even Berlin, without thinking about World War II.

A difficult time that should always be remembered. Like the quote in the Information Center of the Holocaust Memorial states: “it happened, and therefore it could happen again”.

It happened, unfortunately, and today Berlin is full of places honoring those who lost their lives in the war.

The city has an underground atmosphere and many unique cool areas that you only find there.

Memorial to the Murdered Jews of Europe

This might be the most famous ww2 memorial in the world. Many people know it as the Holocaust Memorial. It has 2711 concrete slabs (stelae) from different heights.

As you walk through the maze, the columns become higher and your path becomes darker. The sound of the surrounding streets fades away. It gives the impression that you are lost in the middle of those coffins.

That was actually the idea of the Architect Eisenman, he wanted people to feel the disorientation and loss the Jews felt during the war. Each stone has an exclusive size, pointing out the uniqueness of the people murdered.

There is a lot of criticism around this construction: some say a lot of gray columns don’t represent what the Nazis did to the Jews and people can’t connect to it. Others say it represents the Nazi death camps.

I personally approve this memorial, because I felt so uncomfortable as I walked between the slabs, exactly how the architect wanted people to feel; to show to the world how powerless those people felt.

Read next: Amazing things to do in Berlin (that you can’t miss)

Trying to avoid acts of vandalism against the monument, such as swastikas and graffiti’s, the company responsible for the construction of the monument hired a company called Degussa to coat the concrete slabs with a special solution anti-vandalism.

However, it seems that Degussa once owned Degesch, the company accountable for producing Zyklon B, the gas that killed millions of Jews in concentration camps around Europe.

Many years have passed and the people working there today aren’t in favor of the Nazi regime of course, but it still sounds ironic. What do you think about this monument and all its history?

Haunting. The Information Center underneath the Memorial to the Murdered Jews of Europe is an educational and disturbing place.

It’s very touching to read about the persecution of the Jews, but at the end of the first part, where they hanged photos of Jews, saying who they were and how they died…I got very emotional.

I’ve always read about what the SS and Gestapo did to those people, but seeing some of their faces right after the story, was very disturbing.

In the second room, there are some letters written by people of all ages who knew they were going to die and wanted to say farewell to their beloved ones; I was very emotional here too. The museum has 7 rooms in total.

Places like this one serve as a reminder to all future generations, I highly recommend that you visit it. Free entry and guided tour at the Information Centre under the Field of Stelae. When is the guided tour? Saturday at 3 pm.

The stunning German Parliament, the Reichstag, was a decisive place in the course of ww2.

In 1933, four weeks after Hitler became Chancellor of Germany, the Reichstag was suspiciously set on fire which made it possible for the Nazi party to gain more power as President von Hindenburg passed an emergency decree suspending civil liberties and allowing the pursuit of the Communist Party of Germany.

Architecture-wise, the building has a gorgeous mixture of styles, such as Baroque Revival, Postmodern and Renaissance.

After the renovation, a glass dome with a 360-degree view was built on top of it. Beautiful contrast between old and modern architecture.

The building is not only glamorous, but it also has free entry and audio guides available in many languages.

As you walk up the dome, you hear about the story of Berlin and many things that happened during and because of the Second World War. Don’t forget to make your registration in the Reichstag website so you can visit the building.

This museum was built in the old location of the headquarters of the SS, Gestapo and the Reich Security Main Office. It exhibits texts and photos explaining how the SS acted, the crimes they committed and how they brainwashed millions of German soldiers to become monsters.

The Topography of Terror is very interesting, but it’s not interactive and there is a lot to read. I didn’t read everything, however, I’m glad I visited it. It clarified many doubts I had, for example how they recruited men to make their armies.

There are guided tours on Sundays at 2 pm in German and at 3:30 pm in English. If you’re interested in the tour, sign up at the reception 30 minutes before the start.

Ps: There are 200 meters of the Berlin Wall in this site, they’re now part of the Documentation Center. Opens daily: 10 am to 8 pm. Admission is free

Checkpoint Charlie was the crossing point between East and West Berlin and became a symbol of the Cold War. It witnessed a few escapes and many attempts and deaths.

Today a copy of the sign and guardhouse serve as a touristic attraction. The place itself isn’t that interesting, but it’s very symbolic, so it’s worth a visit. Interesting fact: There were another two checkpoints, Alpha, and Bravo.

This piece of the wall is one of the main reasons why people visit Berlin and I can tell you this: you won’t be disappointed. It has 1.3km of a lot of history and art.

The Berlin Wall which divided the city from 1961 to 1989, was constructed by the German Democratic Republic (East Germany).

At that time people weren’t allowed to cross this wall, not even to see their families, or go to their jobs on the other side, nothing!

As a result, many people died trying to cross these walls, however, around 5.000 people managed to successfully escape to West Berlin.

How to get there?

Go to Warschauer Strasse station. From there, it is a five minutes walk.

Interesting fact: “My God, Help Me to Survive This Deadly Love” is the most famous graffiti on the Berlin wall. This fraternal kiss is a special form of greeting between the statesmen of Communist countries.

It’s based on a photo taken from Leonid Brezhnev (Soviet politician) and Erich Honecker (German politician) during the Cold War.

This is a memorial and a military cemetery honoring 7.000 of the 80.000 Soviet soldiers who died fighting.

We were really impressed when we saw this imposing and magnificent memorial. There is a huge statue of a Soviet soldier holding a German child, standing over a broken swastika.

The 16 stone sarcophagi around the central area represent the 16 Soviet Republics and have quotes of Stalin on it (only in German and Russian).

Opposite to the main statue, there are two statues of kneeling soldiers before Soviet flags. Beyond the soldiers is a statue of a woman crying, it represents the motherland suffering the loss of her sons.

Pssst: The Soviet army was indispensable to defeat Hitler, however, when the war was over people in Germany continued suffering in the hands of the Red Army.

They had lost their sense of humanity during the war; hence, why they would drink a lot and rape many women, among other atrocities. They built these monuments.

I’m not judging the Soviet army, just know that many of them weren’t angels either.

Nevertheless, this site is a must-see in any Berlin itinerary.

“Telling stories with objects” as stated on their website, is the Museum’s collections principle. These objects exemplify the Jewish culture and history and honor the people whose stories they tell.

The museum has a lot of detailed and interesting information about the Jewish presence in Berlin and Germany, you can easily spend 3/4 hours there.

Unlike other museums in this post, the Jewish Museum has lots of interactive exhibitions.

There are two buildings, the entry area for the permanent exhibition has gorgeous Baroque architecture and the main building, Libeskind, is a phenomenal modern construction. Really impressive!

A wonderful way to learn about their history is to make a walking tour in Berlin! In the inexpensive Jewish Berlin’s Destruction & Rebirth tour you’ll hear tales of Jews before, during and after World War II.

The guides are very passionate, which makes it an excellent tour!

House of the Wannsee Conference

This is the location where the high officials of the Nazi party on January 20, 1942, discussed the “final solution”, or better saying, the extermination of the European Jews.

The house turned into a museum about that meeting, the victims, and perpetrators.

It shows the whole process of social exclusion and the mass murderer of European Jews. It has free entrance, but the audio guide costs €3.

The house isn’t really in the center of Berlin, but if you buy the train tickets for the A&B zones, you should be covered. Take the S-Bahn S1 (direction “Potsdam Hbf”) or S7 (direction “Wannsee”) to Wannsee Station.

From there take the bus line 114 (direction “Heckeshorn”) until the “Haus der Wannsee-Konferenz” stop.

Hitler moved to the bunker in 1945, that was also the year he married Eva Braun and they both committed suicide. It might sound impressive, but it isn’t! His bunker was actually intact until 1989 when it was finally destroyed.

Today there isn’t much to see, only an information sign explaining how his bunker was. Okay, I know it isn’t exciting, but this is the place where one of the most dangerous men in the world was hidden! Where? At the corner of In Den Ministergärten and Gertrud-Kolmar-Straβe.

A hidden and powerful memorial, the Book-Burning remembering is located in the ground at the Bebelplatz, close to the Humboldt University.

This is a memorial for the 20.000 books the Nazis set on fire on this square on May 10, 1933. The books were of course from the people the Nazis would persecute the whole war.

Stumbling Stones is a project which commemorates those who were persecuted by the Nazis. These blocks were laid in front of the last voluntary house of the ww2 victims. On those blocks, you can read their names and fate.

I live in the Netherlands and there’re many of those plates on the ground in my city, and I never knew why.

After I visited Berlin I learned about them and wow…the consequences of the Second World War are still so present in the lives of the European people. Incredible. To know where to find the stumbling stones check out the Stolpersteine website.

Sachsenhausen was primarily used for political prisoners but later was also used for other prisoners.

I’ve written a whole post about this sad place because we weren’t really sure if we should go there (it was REALLY cold that day), but we went there anyway, and I’m glad we did it! I HIGHLY recommend you visit this place.

Read my article about the Sachsenhausen concentration camp to know a bit more about this place.

What do you think about the Berlin of the Second World War? Have you ever visited war sites in another country? Tell me about your experience!

Did you like this post? Do you want to visit Berlin, but you’re not going yet? Pin this post so you can find it easily later!

what is vpn on windows 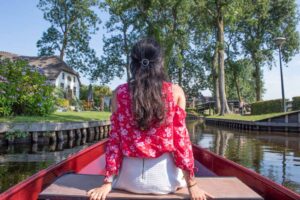