Home » Europe travel tips » France » Why Is Paris The City Of Love? [Explained] 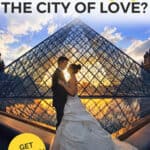 Pssst, FYI – this post contains affiliate links and we earn from qualifying purchases. For the full scoop on what this means, feel free to check out our disclosure.

Is Paris the City of Love? Well, some say it’s in fact the City of Light. One thing is for sure: Paris is the city of romance.

Every year, the French capital inspires millions of visitors, just like it did with many artists who found in Paris a place to call home.

The city has been the scenario of countless romantic movies and books, but that only leaves us with more questions:

You see, this is a virtuous circle that put Paris in the top spot of the most romantic cities in Europe, and perhaps, in the world as well.

Is Paris The City of Love?

Wanna know the reasons why Paris is the City of Love? Read on!

10 Reasons why Paris is the City of Love

Paris is the City of Lights

An evening stroll along the River Seine will show you why the lit up buildings and monuments make this place the City of Light.

Like jewels in the French night, the Louvre and the Musée d’Orsay shine when the night covers the city. The same happens to the glorious Eiffel Tower which sparkles over 20,000 lights bulbs every evening.

Pssst: Book a hotel with Eiffel Tower views! We talk about our favorite one in this Paris hotel guide.

These are only a few of the many impressive French buildings that get lit up every evening giving the city an extra charm. As if it was even necessary, after all, this is the city of love.

That’s because to see world monuments shining in the Parisian streets at night has a unique appeal. Making a stroll along the Seine River extremely romantic.

Many lovers propose in Paris

Anyway, the Eiffel Tower is the world’s 2nd most popular place where lovers propose. Can’t blame them. Have you seen it sparkling in the evening? It’s magical!

Needless to say that while most tourists stay 4 days in Paris, some lucky newly-weds choose the Parisian atmosphere for their honeymoon destination.

“Paris, city of love” in French

Lots of romantic movies have been set in Paris

Paris is to many artists, especially writers, what Burgundy is to Pinot Noir. It’s all about that sense of place, climate, geography, and culture that shape the flavor and texture of a thing.

You can make great wine out of pinot grown in Oregon and Chile – but it’ll never, ever approximate the glory of Burgundy.

That’s one of the reasons why Paris, the City of Love, is set to some very romantic movies (and books too), such as Before Sunset, Amélie, Midnight in Paris, Moulin Rouge, to name a few.

Pssst: Get a 30-day free trial at Amazon Prime Video, and watch these and other titles for free!

Artists always paint Paris as the most romantic city

As mentioned above, Paris was and still is a source of inspiration for many national and international artists, and because of that, all this inspiration and romanticism is somehow reflected or represented on their artworks.

The more people see and read about the City of Love, the more they see it that way, and hopefully, start to feel it themselves too. After all, the world could use some love, don’t you think?

Note that we said “read” because in literature are dozens of books set in Paris that are also ridiculously romantic.

In essence, when a group of people starts portraiting a place as anything – romantic, dangerous, hipster, that feeling slowly spread across society until it’s a trademark of that place.

And there you have one of the biggest reasons why Paris is the City of Love.

Read next: 10 Reasons why Paris is always a good idea

French is considered one of the sexiest languages in the world

French is a syllable-timed language rather than stress-timed, such as English. So every syllable takes approximately equal amounts of time to pronounce, making it sound harmonious.

Furthermore, native French speakers have this husky voice, which is usually very attractive for women…and men – Jurgen Klopp, Liverpool’s coach, even made a funny comment about his translator’s voice, Sébastien Plader﻿. See below.

Like it or not, French is sexy AF. There’s something about this language that sounds sweet and soft to the ears, a certain je ne sais quoi that makes it absurdly hot to most westerns.

In fact, French often holds the top spot on this list, only losing – sometimes – to Italian and Spanish.

Even the Belgian Dutch sounds prettier than the Dutch from the Netherlands (sorry, love you, folks!) to many because they have a French accent, and therefore, a harmonious way to speak.

City of Love and Food: The way to the heart is through the stomach

We don’t know about you, but for us, the way to the heart is through the stomach. That’s why we’re always blogging or taking pictures of our food discoveries around the world.

Thankfully, Paris is a foodie destination filled with great delis, cafes, and restaurants. Think of those delicious cassoulets, cheeses, crepes, and macarons. That’s only a part of the fun!

And being one of the largest wine producers in the world, it goes without saying that French wine is divine! Having good ideas for a romantic dinner in Paris yet?

The City of Love has a Wall of Love

Being one of the most romantic cities in the world, Paris had to have a place that obviously reflects this beautiful emotion, love.

That’s why the City of Love has a Wall of Love. How original is that?

“Le mur des je t’aime” has over 310 sentences written in different languages on 612 cute, blue tiles to translate one feeling: I love you.

That’s right. The phrase “I love you” is written all over the wall basically in any language you might imagine. While in Paris, try to spot your language.

Frederic Baron gathered these romantic words by knocking on the doors of embassies and their neighbors and simply asking how to write it.

Needless to say that the Wall of Love in Paris is a common location for romantic demonstrations.

Paris is romantic and ridiculously pretty

It might seem obvious, but the overall style and aesthetics of the city with its imposing buildings mixing architectural styles give Paris a unique atmosphere.

Do you know those quotes about Paris: “Paris is always a good idea,” “In Paris, you can just be?” That’s exactly how the city makes you feel.

The churches, monuments, palaces, you name it – they’re all magnificent and exquisite. Without exaggeration, the streets of Paris are extremely inspiring.

This is definitely one of the reasons why Paris is the City of Love.

Parisians are quite flirty

Yes, Parisians are pretty flirty, and this doesn’t have to be seen as a bad thing.

Flirting is part of the French culture, and many times, men and women flirt not expecting to spend the night together, but because it’s just delightful to do so.

It’s just a way to play with their charms because that’s what they are: charming.

So don’t weird out when someone tries eye contact with you or stares for a split second longer than is normal. That might happen in the metro or someone might even approach you in a cafe.

It’s the flirting nature of the Parisians, and as far as we have experienced/seen, they can take a “no” pretty well. No need to worry.

Wrapping up on Paris the City of Love

The romantic Paris is a place to let yourself get inspired. Deviate a little bit of the touristy routes and you’ll find delightful venues and pretty streets where you can experience and feel why Paris is the City of Love.

Obviously, lovers in Paris won’t have trouble looking for romantic spots around the love city. ♥

Anyway, just know that Paris has lots of nicknames, but if there’s a rightful one to it, is Paris the City of Love.

Are you traveling to Paris this spring? Then check out our guide to Paris in March.

Did you like this article about why Paris is the City of Love? Then pin it to your Pinterest board.

Bruna has traveled extensively throughout Europe, but the places she can't be far for too long are Ireland, France, Portugal, and the Netherlands, where she calls home. She loves helping people to make the most out of their travels, and she is also an expert in fun facts, flags, and all things pepper. Bruna is more than happy to teach you, dear reader, from how to choose the best backpack to how to find the best places to visit in Europe and beyond.

2 thoughts on “Why Is Paris The City Of Love? [Explained]”